Tap into the drive and the talent of this young generation to create the largest army of change makers, leaders and problem solvers.

Although the data is murky and it is politically difficult to admit, India has a massive and growing challenge educating and creating decent work for her youth. Some 374 million Indians are between 10-24 years old and they constitute a fifth of the world’s young people. They represent extraordinary talent and ambition but face equally extraordinary challenges.

The facts are grim. Half of them drop out before Class X. Nearly a million turn 18 years old every month and start looking for employment. However, jobs are scarce because employment growth is half of population growth. At 16%, unemployment is much higher among the youth (15-29 years) than those over 30 years (1.5%). Only half the working-age population is working or seeking employment; this number is much lower for women (27%).

Paradoxically, a higher-educated Indian youth is six times (35%) as likely to be unemployed as an uneducated one. This is an indication of both the quality of jobs and the quality of the educational degrees. But creating good outlets for their capability and aspirations is one of our biggest challenges.

India is by no means unique in this; many countries face similar challenges, except that our numbers are staggering. The headwinds will get worse as economic growth slows globally and automation and AI relentlessly drive productivity, increasingly putting pressure on formal-sector jobs.

None of this is new. But the problem grows while we fret because we persist with tired approaches that aren’t working and will not work. Einstein famously said that “our problems cannot be solved by the same thinking that created them." This is particularly true for wicked problems of this sort. What we need is a completely new paradigm for youth and the future of work. What might such a paradigm look like?

The first and most important thing is to re-frame the problem. Framing is everything, for the answers you get depend on the question you ask. The problem we must tackle is not how we find decent work for young people. The real challenge is how to tap into the drive and talent of this generation to create the largest army of change makers, leaders, problem solvers.

Humanity is facing a staggering number of challenges, ranging from climate change, environmental degradation, mass extinction, extreme inequality to name just a few. We are in a race against time. One of the most powerful ways to speed up progress against these challenges is to radically increase the number of problem solvers working on these.

Supercomputers are able to achieve their dramatic performance by chaining together tens of thousands of processors to solve a problem. This is the same idea.

Today we have the youngest global cohort in history. In many countries, youth represent the majority of the population. They are deeply worried and frustrated and want to act now as is evident from the global climate change protests, the March For Our Lives in the US, youth marches against child labour in India and youth protests in Hong Kong.

Their talent and drive may be our single greatest hope for the future.

Throughout history, young people have been disproportionately responsible for advances in every field. Yet, we consistently underestimate their ability. Einstein was 26 when he published his work on photo electricity and relativity for which he is celebrated. A large percentage of Nobel prizes, Fields Medals, Turing Awards have recognized work done before the person turned 30.

Many of the greatest entrepreneurs and inventors—including Thomas Edison, Bill Gates, Steve Jobs, Jeff Bezos, Mark Zuckerberg, Elon Musk—were youngsters when they started their enterprises. So too were great warriors like Alexander, Ashoka, Babur and Saladin and revolutionaries like Martin Luther King and Nelson Mandela.

The reason for this is simple. The ability to dream the impossible, to think laterally, ambition and risk appetite are correlated with youth prompting Steve Jobs to give his famous advice “Stay young, stay foolish!"

Creating an environment where people, young and old, feel encouraged to tinker, invent or solve problems has huge consequences.

“Most innovation in 18-19th century Britain and 19-20th century America wasn’t driven by a few isolated visionaries like Henry Ford or Steve Jobs; rather, it was driven by millions of ordinary people who felt empowered to use their minds, to seize an opportunity, to solve a problem, and think of a new way or build a new thing. As more and more people started tinkering with new ideas and new ways of solving problems, a spontaneous combustion happened resulting in the economies taking off," he wrote.

We live in a time of pervasive connectivity when individuals can tackle big problems. There are many inspiring stories of young people in India, often of modest means and little formal education, doing extraordinary things.

Today the young are editing genes, building custom robots and drone applications, turning waste into useful products, creating local apps to solve community problems, building low-cost solutions to water, sanitation, irrigation. But we need a hundred or thousandfold increase in the number of such change makers. Our challenge then is to create a global movement of a billion such change makers. So tinkering, invention, problem-solving, entrepreneurship and leading change must be emphasized—and not just acquiring vocational skills and landing a job. This will inevitably result in more economic dynamism, more entrepreneurship and more jobs.

This leads me to the second shift, which is in the way we think about education and skilling. As the Fourth Industrial Revolution gathers momentum, we are moving into a period of exponential change. Thinkers like Marc Prensky point out that much of our education was designed at a time when we knew with some confidence what is best for our kids. Now we don’t.

That’s because the world is changing so rapidly that their world will bear scant resemblance to ours.

The planet and society may change more in this century than in all of human history. So we need to prepare this generation for where the world is headed rather than where it is.

For instance, much of education beyond literacy and numeracy is about ingesting content.

That made sense historically, but as futurist Ray Kurzweil says, “A ten-year old walking down the street can now access all human knowledge."

“Our kids will live in a world where all the old stuff is online and the new stuff is being invented" says Marc Prensky with only slight exaggeration.

We have moved into a period described as “VUCA" (Volatile Uncertain Complex and Ambiguous) where change is the only permanence and uncertainty is the only certainty. Work is moving rapidly away from fixed jobs as we know them towards gigs and projects. Careers will look less like tunnels from which you emerge 30 years later and more like navigating a maze requiring more of us to see ourselves as free-lancers and entrepreneurs rather than as employees.

The half-life of knowledge is shrinking rapidly; the half-life of an engineering degree is now less than five years and some skills have only an 18-month window of relevance. It will take a very different mindset and skill-set to flourish in this context. Beyond literacy and numeracy, a set of skills called 21st Century Skills are increasingly foundational.

These include abilities like communication and collaboration, curiosity, finding information, creativity, problem solving, critical thinking and decision making. But what may be even more fundamental is what psychologists call “learning agility" which is the ability to learn from experience and apply that learning to completely new situations. This along with what Carol Dweck calls a “growth mindset" and grit will be bigger determinants of success than knowledge.

These tectonic shifts have enormous implications for how we educate young people and prepare them for the future which is here. It requires a revolution in pedagogy and a far greater emphasis on experiential learning through projects.

The good news is that such “useful, real-world improving projects can be done by kids in kindergarten, in high school, in colleges and by people from rag-pickers to rocket scientists in every part of the world. The biggest issue for the world is not to create more jobs but to find effective ways for people to be compensated for whatever world-improving projects they do", writes Prensky in Education to Better Their World: Unleashing the Power of 21st Century Kids.

My third and final point is the need for systems thinking and collective action. Education and employment are the outcomes of complex systems. Improving system performance is incredibly hard because it requires lots of diverse stakeholders to learn together and then to cooperate often against prevailing incentives and interests. This is why simple interventions and solutions such as skilling have limited impact and fixing education and employment are so notoriously hard.

This is why the emerging idea of “collective impact" is so appealing. Collective impact is the idea that in order to create lasting solutions to social problems on a large scale, organizations from private, public and social sectors need to coordinate their efforts and work together around a clearly defined mission. There are successful models of such collaboration, notably GAVI (the Global Alliance for Vaccines and Immunizations) globally or the Swacch Bharat Mission in India.

This month, UNICEF and its partners launched its collective-impact mission called Generation Unlimited (“YuWaah") in India which aims to revolutionize how we engage and prepare young people for aspirational work and societal leadership. It is designed as a multi-stakeholder alliance with business, government, civil society and young people themselves and has lofty goals.

These are well encapsulated in the Sustainable Development Goals. The slow pace of progress against these points the need for new and radically innovative approaches to solving tough problems. It points to the need to involve massively larger number of people—particularly young people—in solving these problems. And most importantly, it points to the need for fresh, strong leadership.

This leadership is unlikely to come from conventional sources of entrenched interests—business CEOs and government leaders, for instance. Leadership for the world’s problems can and will come from anywhere and disproportionately from young people.

Our problems cannot be solved by the same mindsets (or people) that created them.

Ravi Venkatesan is UNICEF’s Special Representative for Young People and Innovation and a former chairman of Microsoft India and Bank of Baroda. 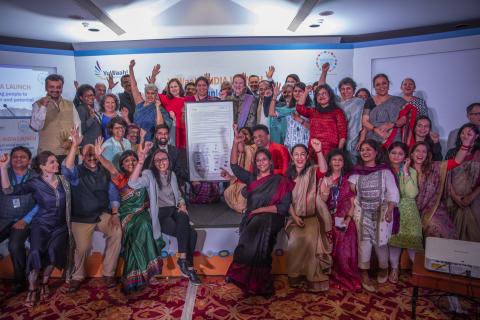 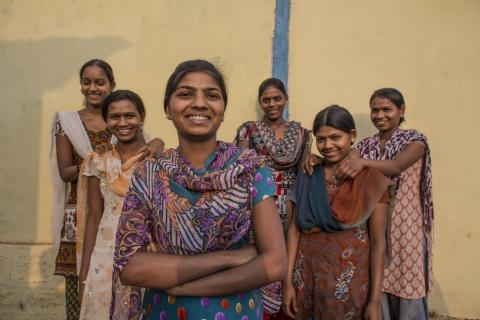 Enabling India's youth, connecting them to aspirational socio-economic opportunities, and engaging them as active changemakers 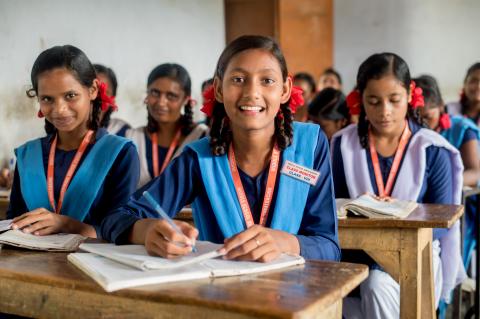 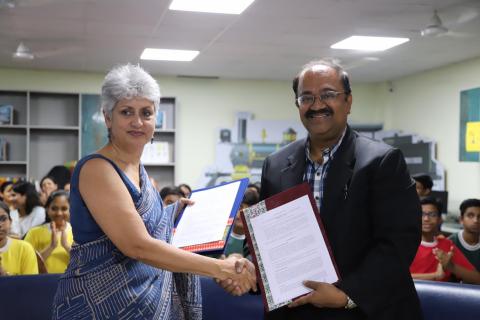 YuWaah! Unleashing the potential of young people in India