Leaders from across the world’s public and private sectors met in New York on Monday, 23 September, for the 3rd meeting of the Global Board of Generation Unlimited to review progress in the last year and announce innovative collaborations and investments for and with young people.

Launched one year ago at the 73rd United Nations General Assembly, in September 2018, Generation Unlimited works to tackle the urgent need to expand education, skill development, training and employment opportunities for young people and prepare them for the world of work. Young people’s meaningful engagement as leaders and problem solvers is central to the partnership.

"We are delighted that in partnership with GenU, we will reach another 10 million girls and change the trajectories of their lives."

“We are a multi-sector partnership, with a public-private DNA, that attracts investment at global and national levels to scale-up programmes and innovations, craft shared value partnerships, and co-create solutions with young people.”

The 3rd Global Board Meeting of Generation Unlimited showcased the power of partnerships as a broad number of Board Members stepped up their commitments.

Following the announcement at the last Global Board meeting in April 2019 of the $1 billion investment by the World Bank to boost job prospects for young people in partnership with Generation Unlimited, Annette Dixon, Vice President of Human Capital at the World Bank announced the first round of this funding to countries, including to Bangladesh to boost the quality and relevance of skills development,  Nigeria for a multi-sector programme on education to enhance skills, and Tajikistan to strengthen socio-economic resilience of vulnerable communities. The World Bank also expressed its desire to join efforts to produce knowledge products in partnership with GenU and others.

Private sector partners of Generation Unlimited announced new pledges, including a multi million dollar contribution from SAP to redefine the future of work readiness, developing a model to build and strengthen feedback loops between employers, education systems, and young people. An in-kind contribution from DSM was also announced to develop an investment model in scalable businesses to deliver nutrition, inclusive economic growth and jobs for youth in Africa.  Notable CEOs also took a leading stand as Alan Jope, Unilever’s CEO committed to coordinate and mobilize private sector contributions to GenU moving forward, while ARM’s CEO, Simon Segars, officially joined Generation Unlimited as a Champion. ING spoke about its plans to develop FinTech initiatives to expand young people’s digital access to education, and Telenor highlighted its commitment to support UNICEF’s and BRAC’s work on GenU in Bangladesh. Additionally, in support of the General Unlimited, staff secondments to the Global Team were announced by the United Kingdom’s Department for International Development (DFID), the International Chamber of Commerce, UNESCO, and SOS Children’s Villages International.

UNICEF / Nesbitt
The Netherlands Minister for Foreign Trade and Development Cooperation Sigrid Kaag speaks during the Third Global Board Meeting of Generation Unlimited.

“It’s very important that we iterate that this is an investment case. This is not a charity, this is smart business, smart investment.”

International organizations including the UNESCO and the UN Department of Economic and Social Affairs (UN DESA) committed additional technical support for the partnership, and ILO expressed interest in leading the partnership in selected countries across the world. It was announced that the new Generation Unlimited Trust Fund will be hosted by the UN Multi-Partner Trust Fund Office at UNDP.

Global Board members were also provided with updates on the implementation of the Generation Unlimited strategy at country level.

In Bangladesh, under government leadership, Generation Unlimited has been launched with the goal of reaching at least 7.3 million young people with education, skill development and employment opportunities and some 1 million new apprenticeships by 2030 by working with partners including BRAC, ILO, UNICEF, the World Bank and Access 2 Information. 15 industry associations - which collectively represent the interests of more than 6000 businesses in Bangladesh - are now being engaged as part of GenU to represent the private sector on the national steering committee. .

In Kenya, under the leadership of President Kenyatta, a Generation Unlimited Leader and one of the earliest champions of the partnership, investments are already being made in youth skills and employment. A high level Steering Committee was created at Presidential level to steer the partnership and the Generation Unlimited platform is being used to design investment opportunities for private/public sector, and establish stronger linkages between employers and the education system.

At the Board meeting Federica Mogherini, High Representative of the European Union for Foreign Affairs and Security Policy, announced the commitment of the EU to scale up a large programme on blue economy with significant youth employment creation potential, as a contribution to GenU.

In India, Generation Unlimited will be launched on 31 October-1 November of this year and a national Generation Unlimited secretariat will be hosted initially by UNICEF. A partnership roadmap and a first portfolio of initiatives has been developed with the private sector and foundations, including UNILEVER, SAP, Quess, CapGemini, Accenture and Mahindra, and partnership agreements between Generation Unlimited and the World Bank, UNDP, UNICEF, Global Alliance for Mass Entrepreneurship, and Ministries of Skills, Youth Affairs and Education are under development, as well as with private sector partners and foundations. Also, a Career Guidance Portal has been launched in three states, including in Rajasthan where it is supporting over 2 million young people in their transition to adulthood.

The Global Board was also briefed on the partnership’s latest work on Generation Unlimited’s Global Breakthroughs- bold innovations- particularly the Business Case for Digital Connectivity thanks to leadership from Dubai Cares. Focus is on supporting a Common Bid for School Connectivity (“GAVI for Gigabytes”), together with the International Telecommunication Union, to connect every school to the internet, and every young person to information and opportunities;  investing in Digital Public Goods, with leadership from Norway; and structuring investable opportunities to increase connectivity access, with piloting of models in Kenya and Bangladesh for replication across geographies.

Also, the creation of the Young People’s Action Team was announced, which will ensure young people have a voice in all aspects of GenU, as well as a new partnership with the Global Shapers Community, a network of over 8000 youth under 30 years of age, formed by the World Economic Forum.

The 2nd round of the Generation Unlimited Youth Challenge was also launched at the 3rd Global Board Meeting and will be co-hosted globally by four Generation Unlimited partners - UNICEF, UNDP, Plan International and the World Organization of the Scout Movement, with support from Irish Aid. The Generation Unlimited Youth Challenge 2019/20 will take place in 40 countries worldwide, reaching at least 1 million young people. It calls upon young innovators to design solutions to their most pressing needs related to education and training, access to employment and entrepreneurship, and youth empowerment.

To learn more about the 1st round of the Generation Unlimited Youth Challenge that took place from 2018 to 2019, click here.

"We started with the right pace, enthusiasm, and also the right mix of public, private, big and small. From our side, we are very pleased with this initiative that is owned by all of us - and with that comes responsibility. Doing what we are doing already is not enough, but introducing the youth angle especially in financing of what we are doing can make a real difference."

With the finalization of its business model, more and more partners are joining GenU’s global and country work making this movement for young people a rapidly growing reality. GenU will now continue to expand to new countries and extend its potential to create opportunities to make public/private partnership a driver of transformational impact for young people. 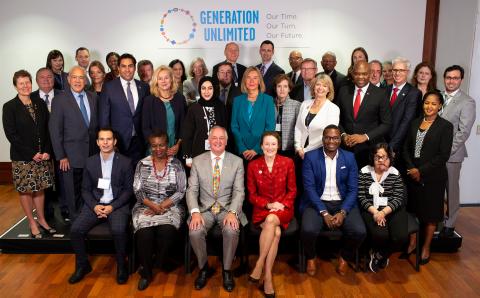 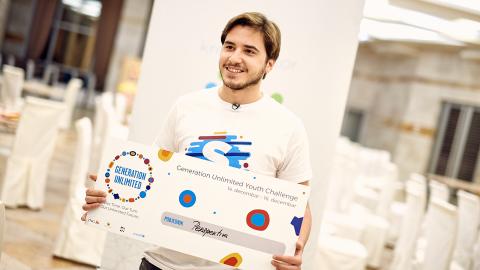 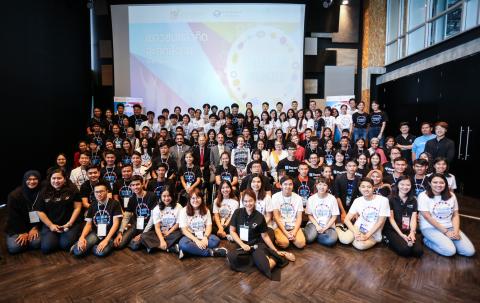 We are bringing together bright young minds to tackle some of the biggest challenges facing their generation. 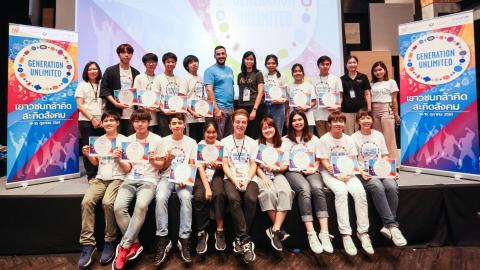 Find out how you can take action for young people with Generation Unlimited.