New York, April 27—The year was 2018, when 200 young African professionals – including myself, were selected to join the 9th cohort of the AU Youth Volunteer Corps (AU-YVC). The AU-YVC is a flagship initiative of the African Union Commission (AUC) set out to promote youth participation, capacity building and empowerment through service and skills exchange and driven by the philosophy of Pan-Africanism and Youth Leadership. Young professionals from across Africa and the Diaspora aged 18-33 can apply to join this program and have been doing so since its launch in 2010. The successful applicants would undergo a training that would be followed by a recruitment process where they have a chance to serve for a period of 12 - 24 months in their respective fields of expertise within an AU partner organization.

Previously, the pre-deployment development training would take place over 2 weeks in an African country where the young professionals would be trained on leadership, soft skills, career development and financial literacy. They would also be coached on the importance of volunteerism and taught about the African Unions’ Agenda 2063. After the training, the volunteers’ professional profiles are placed in an AUC partner database. Partners can then request the AUC to deploy one or more volunteers with the relevant expertise to their organization for a period of 12-24 months.

In March 2021, the 11th batch of AU Youth Volunteers were selected, and this time 238 young African professionals from 55 AU member states made the cut! Unfortunately, the training of these young professionals had to be under-taken online due to the pandemic, but this has not deterred their passion or commitment for being the change they want to see which is evident through their engagement on social media regarding their selection. We have learnt a lot about e-learning since the onset of the pandemic and the training modules that were once solely done physically have largely been adapted to support young people with access to digital technology and continue to offer skills development programs such as this.

The AUYV pre-deployment training was adapted to a 6 weeks online training that now takes a deeper dive into the pre-existing modules with additional development courses that are relevant to the new realities of our world today such as design thinking. The Global Volunteer initiative (GVI) team within Generation Unlimited (GenU) worked tirelessly to digitize their design thinking sprint and continued to skill volunteers across the globe with this tool. Over several months since May 2020, GVI and GenU were able to work with the AUC and train volunteers and relevant stakeholders on how to run a design thinking sprint. Thanks to these efforts 12 AU Youth volunteers from previous batches - including myself, had the exciting opportunity to facilitate the design thinking sub module workshop as part of the broader AUYV pre-deployment training. 238 newly recruited AUYVs is a massive number of young people to keep engaged on their computers for 7 hours that’s for sure but with a big supportive team, it was a success. Having undergone our own pre-deployment training, it was an absolute joy and honor for each one of us to have the opportunity to support in the training of the latest batch of AUYVs.

The design thinking sub-module aimed to build on the systems thinking module the volunteers were trained on in the days before. The systems module gave volunteers the skills they need to develop a ‘systems mindset’ that allows them to deal with complex problems solving. During the systems thinking training, they identified problems faced by young people in a make-believe African country called Hurula. The volunteers were encouraged to imagine themselves as members within the AU committee setting out to propose solutions that address issues ‘Hurulian Youth’ face that are in line with the AU Agenda 2063 Aspirations. The problems they identified were then used as a baseline to for the design thinking workshop.

What is design thinking you may ask? It is a workshop tool that employs the learning by doing approach, allowing participants to work through a creative and imaginative process to design solutions to the problems they identify during the workshop. In this case, the volunteers had already done this which made the workshop run more effectively. With design thinking, the problem and the solution emerge simultaneously. It is a fun and creative process that starts with the people you’re designing the solution for – Hurulian Youth in this case and ends with new solutions that are tailor made to suit their needs.

By the end of the workshop, the volunteers had developed tangible solutions that respond to the identified issues. Before taking you through the solutions developed, here is how the workshop rolled out.

It started off with exciting icebreakers and visioning exercises to get the volunteers comfortable and they then had an introduction to the design thinking theory. Design thinking sprints can be broken down into 4 modules. (i) Sensing: This provided the volunteers with tools they need to gather insights from Hurula, identify their target audience and what would be needed to solve their problems. (ii) Ideation: In this module volunteers had to think divergently as they assess the myriad of ways the problems identified are impacting the communities they aim to support and start to design ways they can play a role in addressing these challenges with the aim of reaching a common vision. (iii) Prototyping: The prototyping phase brings the volunteers to the meat of the workshop as they now have to converge their thinking, pulling those ideas from the ideation process closer together to achieve their goals. They would then create small scale draft versions of the concepts that they can use to test with members of their target audience, gather feedback and refine their concepts accordingly. (iv) Planning: Finally, volunteers had to consolidate the feedback they gathered from the prototype testing and figure out which ideas to take forward or discard. They then planned out how to move the concepts forward, identifying core elements that are needed in order for them to be successful.

Essentially, the design process starts out with multiple great ideas that seem to have no direction and through the various modules explained above, participants work towards honing them to become one clear project that can be rolled out in communities. Although the ideas created during this sprint were based on an imaginary country, the problems identified were all related to real life issues faced by people all around the world especially from the most marginalized and disadvantaged communities. The solutions that the volunteers developed were a clear sign that they are ready to create an impact in their communities and drive tangible change.

The solution developed were very creative and responded to the problems they identified. Although they were crunched for time, they still managed to develop pretty well thought out prototypes that you can see below.

Solution developed for Aspiration 1: A Prosperous Africa, based on Inclusive Growth and Sustainable Development. This team decided they would like to find a way to leverage tourism and create decent jobs for youth. Their idea was to create an innovation space to boost Hurulas agricultural economy by using natural resources and waste generated from tourist visits and developing a viable product from this waste which would include (food products, bags, shoes, water bottles, construction material) all for the purpose of exporting these to higher income countries.

Solution developed for Aspiration 5: Africa with a Strong Cultural Identity Common Heritage, Values and Ethics. One of the teams set out to promote and officialize the Hurulan language. They proposed the development of a higher council of Hurual Languages to promote the different languages including languages and dialects of the minority ethnic group/tribes and conduct a national referendum using the media making widely spoken languages within those communities’ official languages of Hurula. Their comprehensive posters can be seen below.

The enthusiasm, commitment, bright and imaginative ideas that came out of the two-day design sprint give a sense that the future of Africa is looking bright. The volunteers have shown themselves to be agents of change and innovation. ‘Give a man a fish, and you'll feed him for a day. Teach a man to fish, and you've fed him for a lifetime.’ This important life lesson by Confucius has been realized through this training as these volunteers now have the tools to develop even more contextualized solutions to the ails in their communities and teach other young people to do the same, causing a ripple effect of positive impact that has the power to enact socio-economic development. 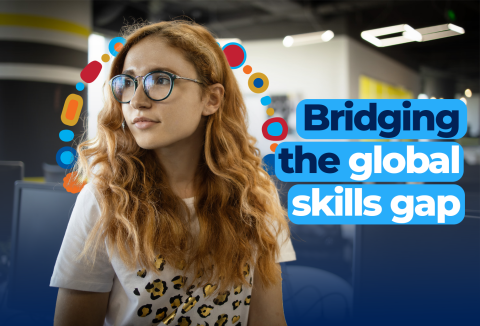 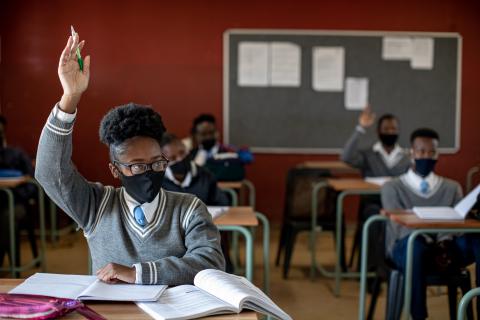 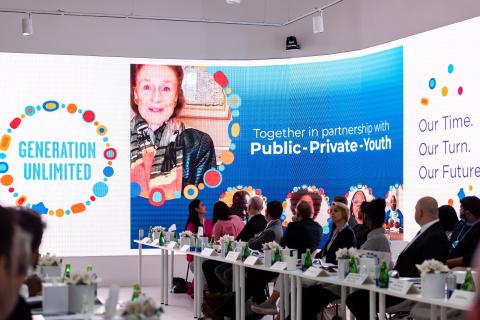 New strategy and commitments launched at the GLC meeting

GenU Strategy 2022–2025 unveiled, along with major contributions to support its implementation for the benefit of youth worldwide 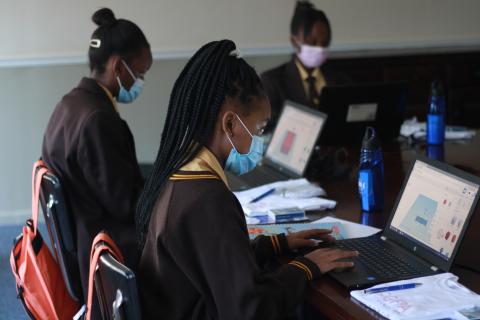 STEM unlocking the potential of girls in rural South Africa